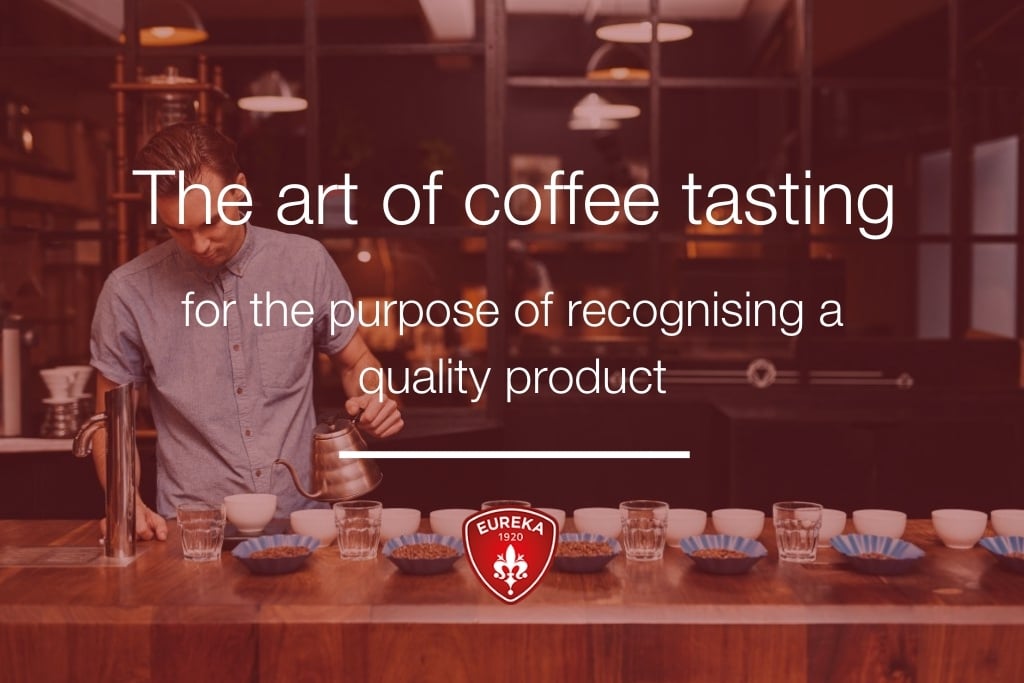 Tasting is one of the most exciting methods for evaluating the qualities of a gastronomic product, a real discipline that is to be discovered step by step and undertaken using a simple approach dictated by passion alone.

Many professionals in the sector have most certainly taken part, at least once in their working lives, in coffee tasting sessions. This has led them to be experts in the steps that rotate around a Cupping table (the name by which tasting using the Brazilian method is known): smelling the aroma, sucking a small amount, receiving information from the palate, evaluating, spitting and then repeating. For those, on the other hand, who are not driven to the tasting table by their work, it only takes one participation to be won over by the enjoyment factor.

Wine, whisky, oil, various types of cheese… the list of products that require a professional approach to tasting certainly doesn’t end with coffee, but is actually almost never-ending!

There is certainly something mystical about the coffee taster, a true aura that is justified by the refined skill that they show, of processing and understanding the different coffee aromas that they encounter, articulating the multiple perceptions that reach their taste buds in such a precise manner.

However, the path that leads to qualifying as a taster is actually simple to understand and accessible for everyone: coffee drinkers, coffee lovers and coffee fans, as well as professionals... The simplest step is to taste one sip and give your opinion!

The ABC of coffee tasting

Taste is a combination of aroma and flavour, a mixture of sensory signals that almost simultaneously reach our body, from the mouth and nose: the aroma is analysed by our olfactory receptors, while the flavour is referred to the sensation coming from our taste buds in our mouths. Another aspect is our perception of touch, the consistency of the food (or liquid, as in our case) also known as ‘oral sensitivity’.

Coffee tasting training is concentrated on what are known as ‘the four terms of quality’, i.e. saltiness, bitterness, sweetness and sourness; a fifth basic taste has recently been added, umami, or rather the taste of glutamate, often referring to as the saltiness of food.

The first step towards the world of tasting is concentrating on carefully evaluating aromas and tastes of every food and drink that we eat and drink daily, including spices and herbs. The human body can identify millions of different aromas thanks to the taste cells that come into contact with the chemical substances present in food and are dissolved by saliva: the interaction between the chemical substances and the cells cause electrical changes in the latter, that turn into chemical signals which are in turn converted to impulses that are sent to our brains.

This is the reason why we can perceive the intensity of a taste, and therefore evaluate whether it is pleasant, unpleasant, or even neutral for us: the neurons of the taste system, in addition to recognising temperature and consistency of the substances we place in our mouths, also register the attributes, just like the neurons in the sight system portray shape, colour and shine.

Do you want to discover how to obtain the best results in a cup?

Smell and taste are defined as ‘chemical senses’ because they allow us to analyse the molecules from the outer environment that we come into contact with while we eat and breathe. The two chemical senses cooperate, telling us of the presence of possible poisons in the air or in edible substances, and thus determining how appetising food and drink are.

There are different types of papillae of varying structure, that can recognise different sensations:

The threshold of perception for sweet tastes is the highest of all the basic tastes. Approximately 1 part out of 200 (0.5%) of sugar in solution is activated: a fact that shows, especially when compared with the perception of bitter tastes, that has the lowest threshold of perception (perceived at 1 part out of 2 million, amounting to 0.00005%), the evolutionary roots of human taste, which is naturally selected to react to the indicators of nutritional content in our foods.

Saltiness is identified in a solution of 1:400 parts (0.025%) and is the first of the four basic tastes that is lost by our organisms as we age.

Lastly, sour tastes are recognised up to 1: 130,000 (0.0008%), and are naturally developed to protect our bodies against possible organoleptic hazards. 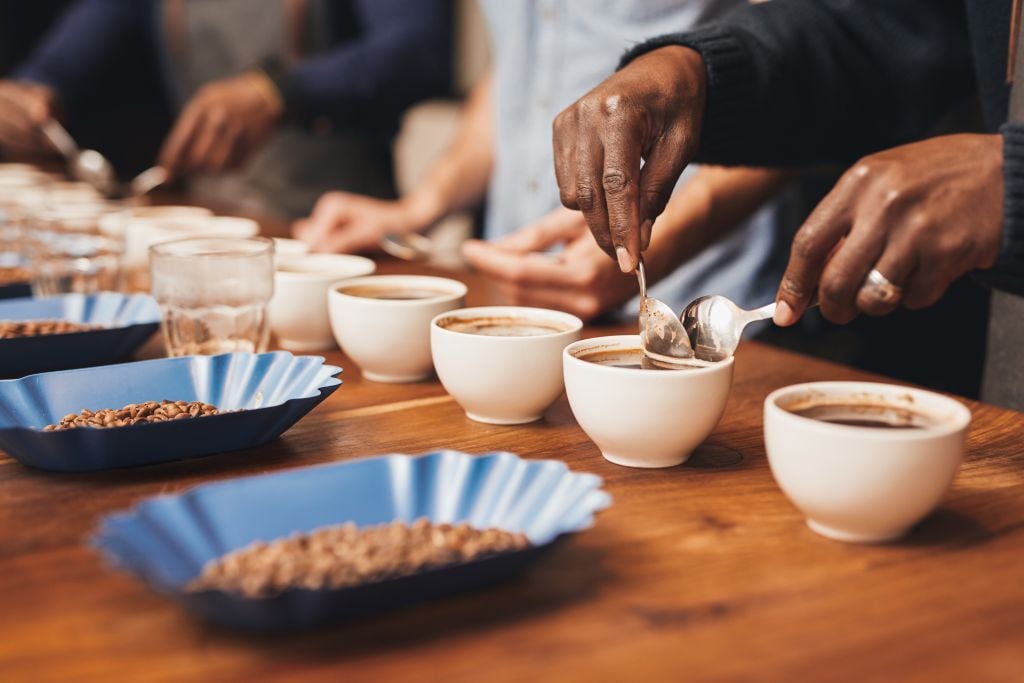 The 5 secrets of the Coffee Taster

It is essential for quality managers, or even researchers, to consider some specific factors as part of their taste analysis, that range from qualifying the product in question: aroma, consistency, solidity, basic tastes, level of ‘spiciness’ and the spice it corresponds to, the level of sweetness or saltiness and lastly, after-taste. Also, if the evaluation is carried out by the final consumer, other factors are then included in the verification process, such as visual analysis, composition and colour of the product, size and quality of the garnish, and also commercial aspects that also contribute to influencing the final opinion.

The Coffee Taster judges objectively, and this is why he or she must have some qualities:

Aspiring tasters, however, must not give up: it is possible to acquire the training required to have this exciting job though frequent experiences in tasting groups. The basis is having an ability that, except for those very few lucky super-tasters by nature, can be learnt through a lot of practice!

Being part of a tasting group makes the effort easier, and tasting coffee become even more enjoyable: Sharing individual evaluations, in fact, has a positive and advantageous effect on the entire group, although there is the risk of mutual influence among the participants (especially if there are expert tasters and beginners).

This is why it is better to have the joint discussion and analysis at the end of the evaluation, perhaps using written notes made in the stage immediately prior to the discussion, to make the possibility of interference in the individual notes made by each participant even more difficult.

Usually, the introduction to any tasting event is a kind if ‘calibration’ among participants: the qualities and characteristics of a single cup of coffee, chosen outside the samples to be analysed, are discussed together by the group, so that are certain homogeneity of evaluations and impressions can be checked. 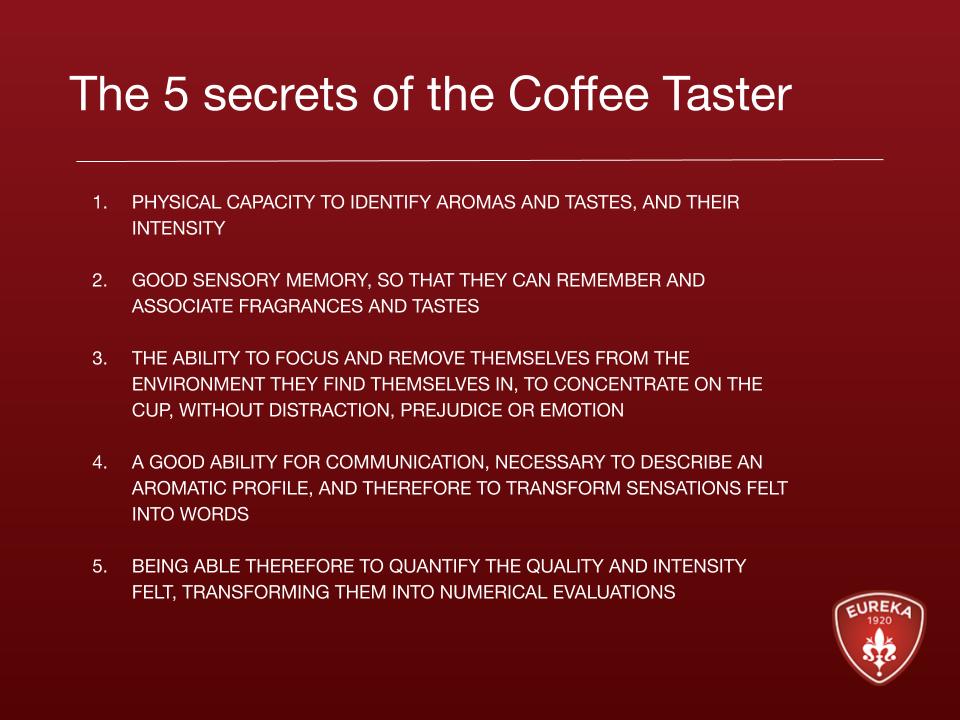 Can a sensation be quantified?

Coffee is a global product, for which the distribution network in recent decades has become increasingly sophisticated: producers and merchants, roasters and baristas must all be interested in coffee’s aromatic profile.

Tasting has always been the method used to set the price for producing coffee, and it now is also an active part of defining and dividing the product into micro batches with slightly different aromas.

Allocating a numerical value to an aromatic perception is a difficult task, and may give rise to some perplexities on the matter: are the numbers the same for all types of coffee, or do they have to be relative to some individual aspects of each producing country? How can a taster from Guatemala, who has spent his entire career judging coffee from his country, evaluate coffee in the same way as his Kenyan colleague?

In replay to these and other questions, in an attempt to contribute to the creation of a single international language, in 2004, the Coffee Quality Institute began the training and certification path called QGrade: the programme teaches how to recognise standard aromas and as much calibration as possible among professionals, in order to define as homogeneous an approach as possible based on the evaluation and recognition of aromas.

Another step was the creation of an international tasting sheet in the early 2000s by the Specialty Coffee Association of America (SCAA), which determines the basic attributes according to fragrance/aroma, flavour, acidity, body, aftertaste and balance (to which uniformity, sweetness, clean cup and presence of flaws were added in later editions).

It is not the only association that has its own tasting sheet: the Cup of Excellence has also created one, for some very similar aspects, except for the inclusion of roasting tones among the items for verification.

The main goal of the evaluation sheets is clearly to aid the taster in his task when called upon to describe the qualities of the sample he has tasted: it must therefore be intuitive and efficient, so that the judge’s concentration and attention stay on the coffee.

Let’s take a look at an evaluation sheet...

We will now look at each section on the evaluation sheets used during coffee tasting sessions:

How to lay the table for coffee tasting

‘Cook the same food in a different way and you will obtain totally different tastes’ is one of the most well-known aphorisms among the best chefs, but which can also be applied outside our kitchens and involve the world of coffee too. Roasting, in fact, and also the way the tasting cups are prepared, have a strong impact on the perception of the aromatic bouquet of the coffee being evaluated.

Preparing the tasting table must involve as few variables as possible: from the consistent nature of roasting, the size of the coffee grounds, to the amount poured into each cup, it is necessary to be extremely accurate in order to not change the final results.

Water is another component to be considered, in terms of temperature, quantity and quality parameters. Samples must be roasted to light-medium range, for between 8 and12 minutes, air-cooled, with a colour of 63 +/-1 measured with the colorimeter. The ideal coffee/water proportion is 8.25g per 150ml of water at 93°C, clean and odourless; the sample must be ground at the time of tasting, with a medium-large grain of approximately 850 microns, and the time running between grinding and pouring on the water must be no longer than 15 minutes.

To conclude, we might say that tasting is a personal experience that is developed through a scientific approach. The impact that an evaluation has on a coffee sample is enormous and can cover several levels of its process, intervening in both ‘pricing’ a harvest of beans and the purchasing of a batch by the coffee roaster.

The Coffee Taster must have a lot of self-control, without being influenced by previous experiences, emptying his mind at every taste, and having no prejudice. The art of coffee tasting is a complex one, but one that brings with it a kind of magic that is expressed in two cups apparently being the same, that explore the palate with aromas that are also opposites once they are brought to the mouth!

Do you want to discover how to obtain the best results in a cup?

Behind a good coffee, we can experience a wide range of aromas; each coffee offers different...